Slovenia, a country about the size of Wales, located in south-eastern Europe, is home to around two million inhabitants. Bordering Italy, Austria, Hungary and Croatia it brings together a German, Slavic and Mediterranean world. Before the First World War, Slovenia used to be part of the Austro-Hungarian Empire, later becoming one of the six republics forming Yugoslavia, which existed in one form or another from the end of the First World War to the nineties.

Slovenia, is ranked 10th on the Global Peace Index 2016. Not just one of the safest countries in the world, it is also one of the greenest countries in Europe, with more than half of its surface covered in woods where rare animals like the bear, wolf and lynx live. The beauty of its natural environment makes it a perfect destination for unforgettable activity holidays.

Slovenes are usually described as quite disciplined, hardworking and honest. On the other hand, they are mellow, kind and friendly and have a good knowledge of foreign languages. They are more than happy to chat to visitors over a glass of delicious wine grown in the vineyards scattered around the Primorska, Štajerska, Dolenjska and Prlekija regions.

Slovenia has many sporting achievements, especially in extreme sports. Davo Karničar was the first man to ski down Mount Everest and Martin Strel was the first to swim down the Amazon and Mississippi rivers. He still swims at sixty years of age and raises awareness of the rapid pollution of the waters of the world.

Slovenia, the only country in the world with love in its name, is the perfect location for savouring the good life.

you will be charmed

Situated in the heart of Europe, Slovenia is a boutique country between the Alps, Mediterranean Sea, mysterious Karst with more than 11,000 karst caves and Pannonian Plain, rich in healthy water springs.

The capital of Slovenia is Ljubljana.  As its inhabitants and numerous visitors will tell you, it is, indeed, a people-friendly city.

In Ljubljana the old meets the new. It has managed to retain traces from all periods of its rich history; from the legacy of the Roman Emona through to the Renaissance, Baroque and Art Nouveau periods – as characterised in the house fronts and doorways of the city centre, the romantic bridges adorning the Ljubljanica River and its attractive park, which stretches deep into the centre of the city.

Here eastern and western cultures meet and the city itself is a bridge between Germanic and Mediterranean cultures. With only around half a million inhabitants it is small but it is also one of Europe’s greenest and most pleasant cities.

The restricted traffic in the city centre and the numerous cafes that spread along the banks of the Ljubljanica River make it one of the most laid-back capitals in the world. Ljubljana represents an ideal departure point for the discovery of all that Slovenia has to offer.

The unique Karst region, the Adriatic coast, the mountains, the hilly wine-growing regions of Dolenjska and Stajerska, the spas and many historic towns are all within a two-hour drive. 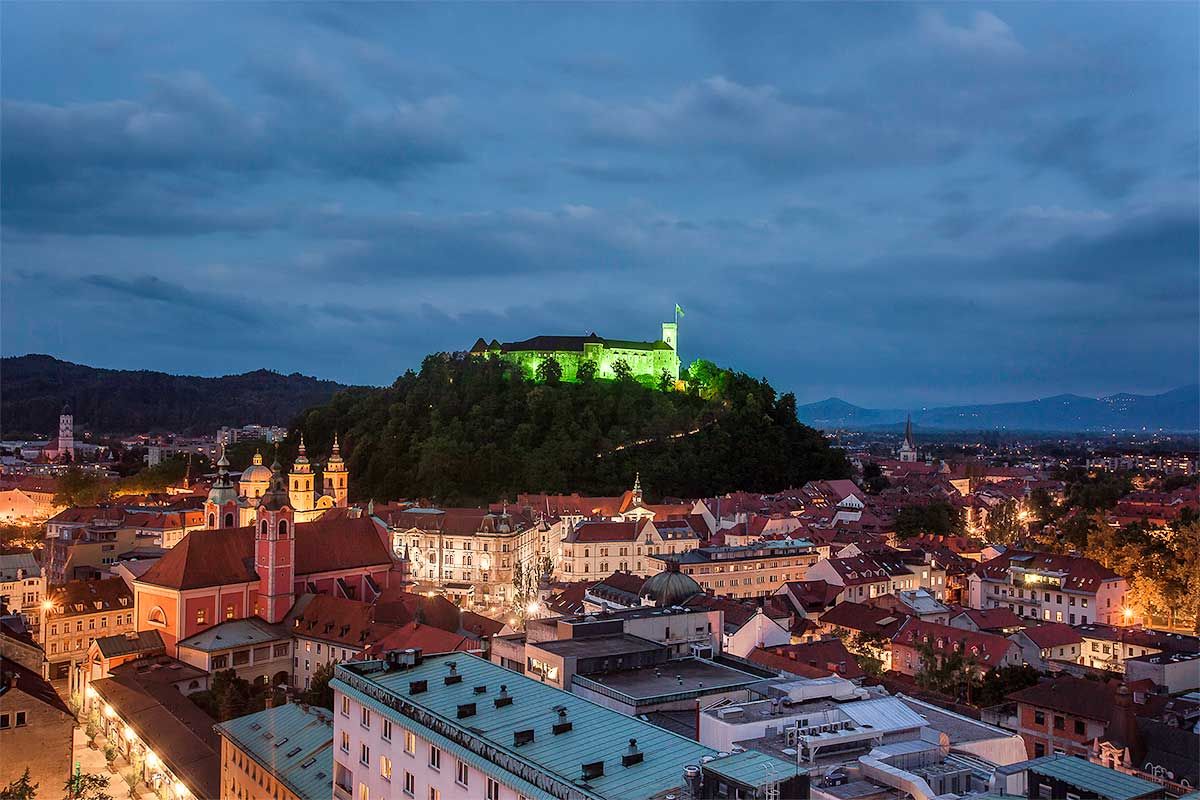 Where your wishes come true

One such place is the astonishing Lake Bled with its central island, which you can visit by taking a ride on a traditional handmade pletna boat or by hiring a boat and rowing there yourself.

The castle on the hill overlooking the lake offers magnificent views of Bled itself and the nearby Julian Alps, which attract nature lovers in both summer and winter. In the centre of this region stands Mount Triglav, symbol of the Slovene Nation and the tallest mountain.

A popular belief says that you are not a true Slovene until you’ve climbed Triglav. Slovenes are traditionally known as keen skiers and lovers of winter sports. Every year masses of people migrate to Planica Valley to watch the championship ski jumps. The ski jumping hill in Planica is one of the biggest in the world and it was here that the first human in history jumped over 100 metres on skis, later also exceeding the 200 metre distance. 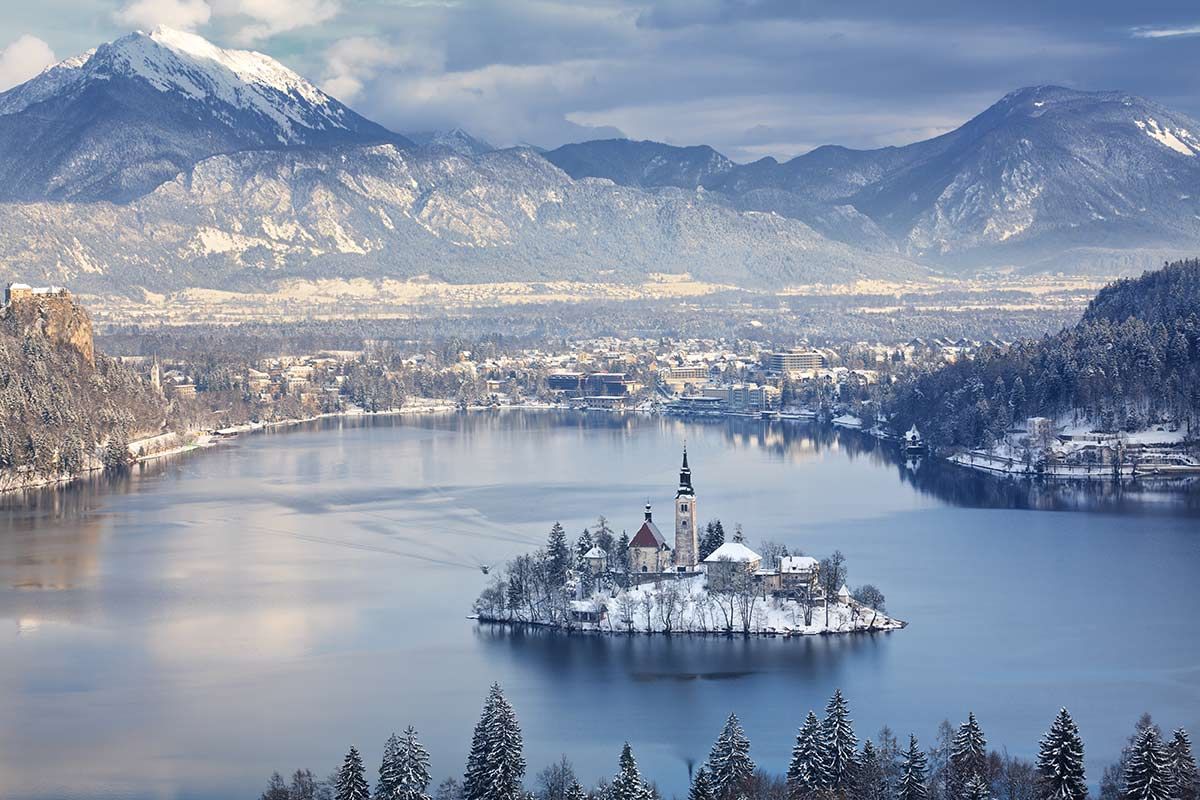 The lake fills in the spring and during rainy periods, offering opportunities for numerous watersports and fishing.

Slovenia even has a small coastline. Even if it is only forty-six kilometres long, it is magical.

The picturesque town of Piran is a nice place to relax and explore the evocative back lanes, hike up to the cathedral, walk along the medieval city walls and enjoy the views of Piran and almost the entire Slovenian coast.

Like many towns on the Adriatic coast, it was once ruled by Venice and has retained its Venetian flavour. 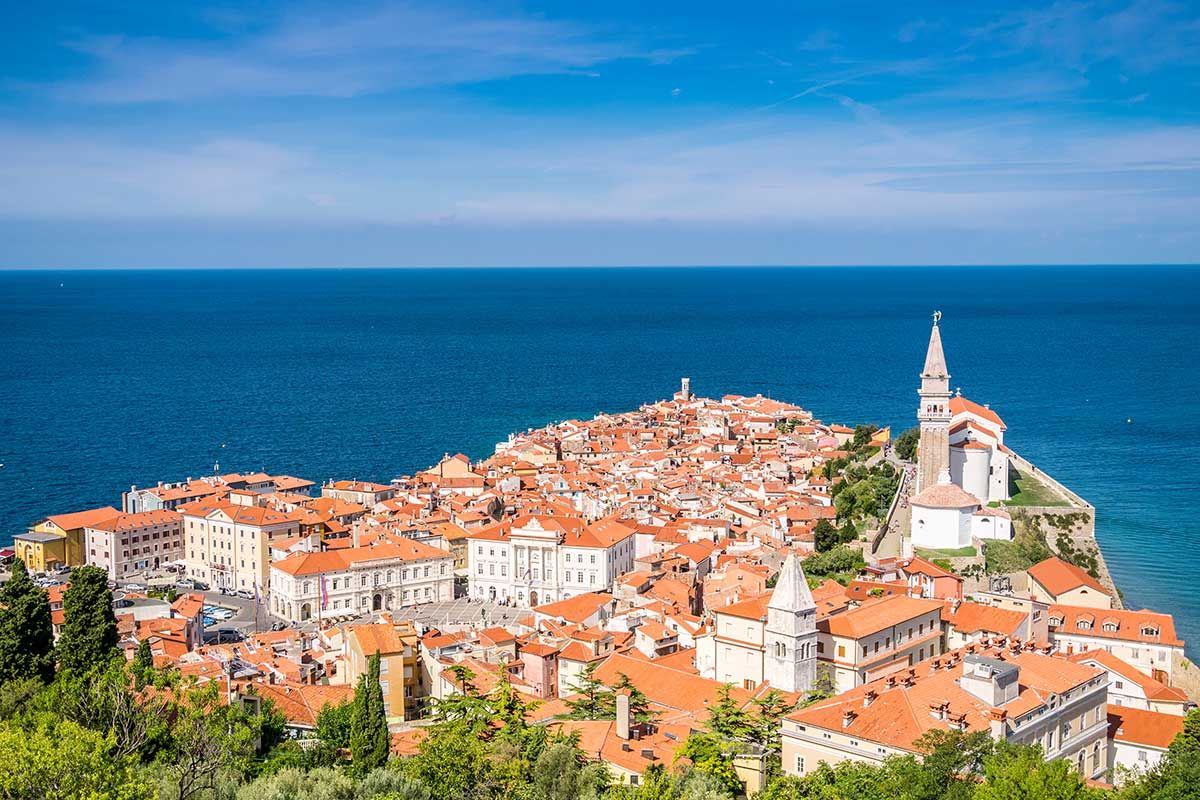